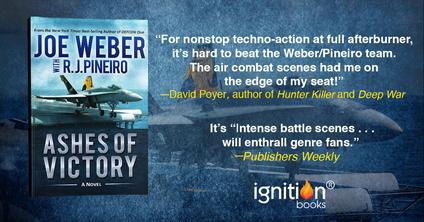 ​"An excellent read. Lawson Pacheco is used to fighting a secret war, but when he finds a secret that feels wrong, he won't rest. Asking questions costs him and those he loves, but the answers are more important. R.J. Pineiro's story starts out strong, and then it gets better."
--Larry Bond, New York Times Bestselling author of Red Phoenix

​​​​ A RUTHLESS ECO-TERRORIST.
A WOMAN DETERMINED TO STOP HIM.
Clive Cussler meets Douglas Preston in this gripping scientific thriller.

"Fiction of the first order!"--Clive Cussler on Firewall
"Fascinating, stupendous, and terrifying."--Douglas Preston on Havoc

William Kiersted is committed to crippling humanity through frightening acts of ecological terrorism.

Across three continents, the battle rages as Kiersted manages to stay one step ahead of his pursuers while executing a plot so grim, yet so compellingly real, it reads like tomorrow's headlines.

I was happy once. I just didn’t know it. I had a family. I had friends. I had a good job. And one day it all ended.

There are defining moments in people’s lives; times forever etched in our minds. Some are good. Others not so. For David Wallace, there was no worse time than receiving the news of his family’s death while confined to a jail cell on murder charges.Seven years later, David has moved on with his life having started a non-profit shelter for battered women, still haunted by the indiscretion which changed his world forever. But there are dark forces in play demanding a reckoning. As he’s besieged by past demons, David discovers enemies and crimes so heinous, and so far-reaching, they threaten to propel him down another avenue of regrets

"This Military Adventure Thriller Deserves to Become a Genre Classic."

When ISIS detonates nuclear weapons in two key American strongholds, the United States plunges into chaos and the CIA scrambles to prevent a third tragedy in Without Mercy, a terrifying and topical thriller.

​In Without Fear, Colonel David Hunt and R. J. Pineiro have crafted another action-packed, frighteningly plausible thriller steeped in authenticity.​